ITS TIME FOR CONSUMER TO CONSERVE MONEY AND RESOURCE, NOTES EXPERT

SAVE AND CONSERVE...With the escalating prices of necessities, consumers have to be careful with their spending. Eating out should be an occasional treat instead of a daily affair. Pic: fotoBERNAMABy Melati Mohd Ariff

This last of the two part series touches on the increase in electricity tariff and what consumers can do to save on their money and resources.

KUALA LUMPUR, July 19 (Bernama) -- Many consumers have yet to feel the full brunt of the rise in the electricity tariff, which went into effect on June 1, 2011.

However, some people may suffer from sleepless nights thinking of ways to tighten their purse strings while anticipating the domino effect from the higher electricity tariff, such as the rise in prices of essentials and services.

While it is good to curtail spending and reduce debts, for those with large families the financial burden is definitely heavier.

Many are walking on a tight rope while balancing their budget, with their income depleted by the middle of the month. So a credit card or personal loan, even from loan sharks, becomes handy for some as the vicious debt cycle continues.

While Malaysians could count their blessings due to the inexpensive necessities they have enjoyed for many years, there still is nothing better than changing spending habits and saving money for a rainy day.

"The days of subsidised living are numbered, as the government has to review the subsidies on necessities due to the huge subsidy bill," noted Mohd Yusof Abdul Rahman, Group Communications Director, Federation of Malaysian Consumer Associations (Fomca). He made his comments to Bernama recently when asked to discuss the rise in the electricity tariff and the impact on consumers.

It is well-known that Malaysia greatly depends on food imports and is now vulnerable to fluctuating prices due to global economic upheavals and the change in weather patterns that has had an impact upon food producing nations.

"Under these circumstances, the government has no control over the price of the necessities. The same happens to fuel," noted Mohd Yusof.

The public should not only be taught about the marketing mechanism, but also the effect of rising prices on government subsidies.

"Concurrently, the government should inform the people on the impending increase in prices when the subsidy is withdrawn and find ways to help the poor and middle income earners, especially those with a large number of dependents.

"This includes the social safety net, upgrading of the public transportation system and so on," noted Mohd Yusof.

DON'T DEPEND ON SUBSIDY

Though the subsidy paid out by the government is meant to help people, Malaysians are not the only beneficiary, as more than one million foreigners living and working in the country also enjoy the same subsidy.

Mohd Yusof pointed out that, so far this year the government allocated RM23.7 billion, or 14.6 per cent of the administrative expenditure, on subsidies.

To maintain the retail price of fuel the government increased the petroleum subsidy, including that for RON95, diesel and LPG, from RM10.3 billion to RM15.9 billion.

Also, the sugar subsidy went up by 20 sen per kg in May, with the government allocating RM283 million in sugar subsidies.

Come festivals, consumers go on a spending spree. Money is spent on new clothing, furniture, equipment, and also on cookies and food.

Mohd Yusof noted that with the escalating prices of necessities, consumers have to be careful in their spending.

"Plan your expenditures carefully and spend within your means.

"Start saving early and have an estimate of the money that you will need during the festive season.

"This includes the cost of necessities, food, cost of traveling back home and others," he said.

For Muslims who will be fasting during the coming Ramadan, Mohd Yusof advised them to avoid waste.

"Often there is lots of waste during Ramadan, including in the menu when they break fast. Only buy what you need.

"If you want to buy necessities, make a list to avoid unnecessary purchases and just bring enough money to pay for the listed items," he said.

As a consumer organisation, Mohd Yusof said Fomca has always worked to create awareness among consumers and keep them posted about current developments.

Mohd Yusof noted that the campaign, launched in 2008, would continue until 2012 with the theme "Change Starts With Me."

Fomca, he said, has been organising community outreach programmes throughout the nation, with 201 programmes held in 2010, compared with 171 programmes in 2009.

Fomca also organises Financial Literacy programmes with the cooperation of Bank Negara Malaysia to help the younger generation learn how to better manage their money.

Malaysian consumers have to learn about their own financial means before they start spending and should only spend on what they really need.

Also, people should not just depend on purchases, since items such as vegetables can be grown in their own yards.

Though most will shrug off the idea, in the long run they will realise how much they could save and, moreover, they will be helping the environment.

According to Mohd Yusof, the people in Malaysia should start thinking like their counterparts in developed nations.

"Malaysians have to become more responsible and accommodate the changes around them," he noted. 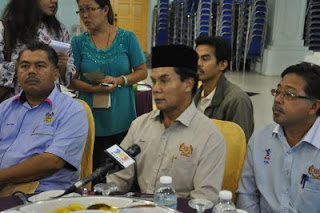 GOVT STILL AIMING FOR THAT ONE PER CENT

PETALING JAYA: Despite being more than 20 years old, a policy of allocating one per cent of jobs in the civil service to the disabled has been difficult to achieve.

Nonetheless, the Congress of Unions of Employees in the Public and Civil Services (Cuepacs) president Datuk Omar Osman said the target was an achievable one.

“If each government agency takes in about five disabled staff, that would be enough to reach the one per cent target. However, sometimes even this cannot be realised due to the unsuitability of jobs and skills,” he told The Malay Mail.

Omar urged public sector agencies and departments to provide a quota for the disabled groups in terms of employment opportunities and to give priority to those who meet the criteria.

Damai Disabled Persons Association of Selangor and Federal Territory president V. Murugeswaran said the policy was redundant as there was no plan to make it work.

"A majority of the disabled can contribute to nation-building but it’s how the civil service wants to tap into their potential," he said.

“The policy cannot just be a statement for political mileage or for publicity's sake. There’s job promotion from the government sector from time to time but the number of disabled takers are not encouraging.”

Murugeswaran said the disabled community have limitations in their physical movement and hence there was a need to create a barrier-free environment.

“How can a disabled person grab the job opportunity if they’re dependent on someone to get around? The disabled must be able to work independently,” he said, adding that many disabled also faced limited skills and knowledge in securing employment.

Association of Women with Disabilities Malaysia president Bathmavathi Krishnan said the one per cent quota was small but nevertheless a start.

"Having jobs available and having candidates to fill the positions is one thing but how does a disabled person get to work remains another problem," she said.

“Many disabled people are in a fix over transportation, hence everything must be in tandem in making the environment accessible.”

Beautiful Gate Foundation for the Disabled executive director Sia Siew Chin said the one per cent aim has not been fulfilled due to work place unsuitability and lack of qualification from the disabled.

“Most schools do not have accessible facilities for the disabled so the community lose out on getting proper education," she said.

“Instead of applying for jobs, most disabled would rather set up a stall and avoid the hassle of travelling, although those with qualifications can get into the civil service easily.”

Sia also said the Welfare Department, for example, had been more serious in reserving job slots for the disabled.

OMAR: Women are patient and thorough

KUALA LUMPUR: The government should take the lead in promoting women to decision-making roles and the private sector would naturally follow suit.

This was the response of the Federation of Public Listed Companies (FPLC) on the recent announcement made by Prime Minister Datuk Seri Najib Razak that women should take up 30 per cent of top corporate positions by 2016.

FPLC's president Tan Sri Megat Najmuddin Megat Khas said there ought to be more high-ranking females in government-linked companies by next year.

Megat Najmuddin said presently, 70 per cent of university applicants are women, which means in the next five years there should be an increase in highly-educated working women.

"More than half of our doctors, engineers, lawyers and accountants are women. This was unthinkable in previous generations.”

Cooperative Commission of Malaysia director Abdullah Mahmood said he is fully supportive of the government's plan.

"This is good to hear as I believe women are just as capable as men in terms of educational standards and ability."

He cited current Bank Negara governor Tan Sri Dr Zeti Akhtar Aziz as a prime example, whom he says is one of the most qualified economists and is more than capable of managing monetary policy.

"Women are often diligent and trustworthy," he said. "In my opinion, they should increase the number of top positions to 40 per cent or not even have a limit at all."

Congress of Unions of Employees in the Public and Civil Services (Cuepacs) president Datuk Omar Osman agrees women should be allowed further opportunities but is uncertain if the move would apply to the government sector for now.

"The corporate world is more appealing anyway because it is far more lucrative."

However, he would like to see future change in this regard as long as women continue to prove their ability.

"If we wish to progress as a nation, we need to see change at some point. In the meantime, we will need to review how able and motivated women are."

He said women are ideal for such roles as they are patient, thorough and contemplative by nature.

"They can offer a reasonable and insightful perspective on things that men may not always provide."

Anulae DBKL chairman Zakaria Abdullah and KLMTU secretary-general Munian Appoo in expressing their gratitude to the mayor for having the interest of the workers at heart added that there should not be any delay as the Public Service Department had approved it.

Zakaria and Munian said this at a press conference at Wisma Cuepacs in Kuala Lumpur yesterday.

Men behind the union: Zakaria (left) and Munian at the press conference on the reorganisation of DBKL recently.

“We are of the view that City Hall is not moving fast enough to implement the exercise because we believe there are some pressure from disgruntled staff,” said Zakaria.

It is learnt that some officers are not happy because they were not included in the exercise.

For example, the PSD only approved 10 slots from the 24 heads of departments to be upgraded beyond their current Grade 54 scale to the JUSA grade.

“The mayor initiated the scheme after having discussions with representatives of the unions and took it up to the PSD and now he must stand firm in seeing it though,” said Munian.

According to Zakaria, the restructuring scheme, which covered all grades of services, was effective July 1.

“But thus far there has been only a few workers upgraded or contract workers confirmed,” he said.

According to a few senior union representatives “little Napoleons” within the organisation with some influence posed a hindrance to the smooth and speedy implementation of the scheme.

The scheme will also see many contract workers confirmed and new intake to fill the vacancies left behind by upward movement of staff. Several departments will also be merged in the exercise to reduce overlapping of duties.