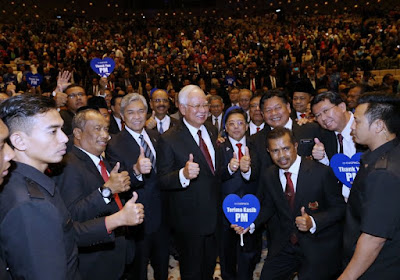 KUALA LUMPUR, April 4 — The Congress of Union of Employees in the Public and Civil Services (Cuepacs) today expressed its delight over Prime Minister Datuk Seri Najib Razak’s goodies announcement, adding that it has surpassed the body’s expectations.
Its president Datuk Azih Muda said that Najib had kept his word, by fulfilling his promises to help upgrade the living standards of the civil servants.
“For Cuepacs, I must say this has exceeded our expectations.
“It was not an announcement to fire civil servants, but to improve the civil service,” he told Malay Mail.
“Someone said he was going to cut down the civil service, but he made it better by giving incentives such as a pay raise, and he also approved the Haj quota for retirees and also increased their pension rate by 1 per cent,” he added, not revealing who he was referring to, as the person wanting to trim down the civil service.
Earlier today, Najib announced that civil servants will get higher salaries effective from July 1.
The finance minister also told government servants in an address here that non-Muslim staff would be allowed to take seven days of unrecorded leave for religious events yearly while there would be a special Haj quota for retired Muslim staff.
He said the salary increment would be equivalent to one annual salary raise (1KGT), adding that the government is still waiting for the allocated quota for Malaysian Haj pilgrims, before deciding on its own quota for retired Muslim civil servants.
Speaking at the 16th Majlis Amanat Perdana Perkhidmatan Awam (MPPA), Najib also announced another new pay grade for school teachers — DG56 grade — for academic officers who have been in the DG54 grade for more than five years.
The move will cost the government RM7.4 million to implement, Najib added.
Najib also announced the extension of healthcare services to the parents of contractual government workers, which will benefit 42,867 staff beginning July 1.
He also revealed a special RM1 million infusion to Cuepacs.
Retired civil servants will also get a 1 per cent increment to their pension rate from July 1 until December 31.
The event today was held ahead of the impending 14th general election, which must be held by August.