PUTRAJAYA: The government will consider a request for an ‘informal holiday’ on July 8 - the third day of Hari Raya Aidilfitri - for public servants who are working on Friday.
Chief Secretary to the Government Tan Sri Ali Hamsa said he would bring up the request made by the Congress of Unions of Employees in the Public and Civil Services (Cuepacs) with Prime Minister Datuk Seri Najib Razak.
"I will inform the prime minister of this; further discussions are needed on the feasibility of having the occasional holiday. Only then it will be brought to a formal setting (in cabinet).
"We just have to wait and see what will be decided on the matter," he told reporters today.
Earlier, Ali had met with Cuepacs president Datuk Azih Muda and other council members for a meeting and to break fast.
At the meeting, various issues were discussed including increasing the number of civil servants to ease the work burden of existing workers and resuming training courses that were shelved as a cost-cutting measure.
Ali gave his assurance that all proposals would be discussed and considered by the government.
He also urged civil servants to increase productivity and give proposals on how to measure productivity aside from relying solely on Key Performance Indicator (KPI) evaluation.
"The government will also look into ways how to address work stress including by those working in shifts.
"We will also look into the feasibility of giving allowances for those who are doing graveyard shifts.
"However, this will depend on the government's financial ability," he added.
356 reads

The government will consider a request for an ‘informal holiday’ on July 8 - the third day of Hari Raya Aidilfitri - for public servants who are working on Friday. Chief Secretary to the Government Tan Sri Ali Hamsa said he would bring up the request made by the Congress of Unions of Employees in the Public and Civil Services (Cuepacs) with Prime Minister Datuk Seri Najib Razak. Pix by Mohd Fadli Hamzah
Posted by CUEPACS at 9:00 PTG 9 ulasan: 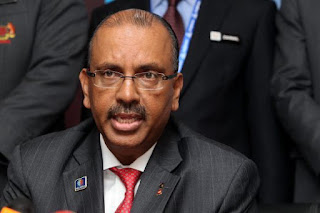 HALF OF MALAYSIANS WHO HAVE DIABETES UNAWAVE THEY HAVE THE DISEASE

NST
By FAZLEENA AZIZ
13 June 2016 @ 2:03 PM
PUTRAJAYA: Half of Malaysians who have diabetes are unaware that they have the disease, says Health Minister Datuk Seri Dr S Subramaniam.He said said there is also an increase in the number of kidney patients in Malaysia, as such the dependency on hemodialysis treatment is also on the rise.He said the number of patients receiving dialysis treatment has more than doubled from 2005 to 2014, at 14,657 and 35,580 respectively.
The number of kidney failure patients seeking dialysis hemodialysis treatment in Malaysia has also increased from 563 individuals per one million of the population 2004 to 1,182 patients per one million of the population in 2014, he added.
The latest National Health and Morbidity Survey (NHMS) 2015, showed that 17.5 per cent of those aged 18 and above, or 3.5 million people have diabetes.“What bothers us is that half of those people with diabetes do not know they have it,” he said today.
He was speaking after witnessing a handover ceremony of a kidney dialysis machine and two hi-flow nasal cannulas to the Putrajaya Hospital today.The items were presented by Sun Life Malaysia (Sun Life Malaysia Assurance Berhad and Sun Life Malaysia Takaful Berhad) and Cuepacs.
It was handed over by Sun Life Financial, President and Chief Executive Officer Dean Connor and Cuepacs president Datuk Azih Muda.The contribution is aligned with Sun Life Financial’s commitment to diabetes awareness and prevention as well as promoting healthy living.The machines would also be distributed to government hospitals identified by the ministry to complement their existing supply of equipment for the benefit of more Malaysians.
Connor said they were confident the contribution would go a long way in helping to strengthen health service delivery for Malaysians.“Sun Life is committed to slowing the advance of diabetes and its related complications by aiming to improve the health and wellness of our clients, employees and the community.
“Since we announced our commitment to diabetes in 2012, we’ve focused our support on diabetes awareness, prevention, care and research, with over USD13 million committed to date,” Connor said.
Azih said the equipment would also complement the existing machines at the hospital and go a long way in strengthening the health service delivery for the residents of Putrajaya.
Posted by CUEPACS at 2:58 PTG 5 ulasan:

KUALA LUMPUR, June 8 (Bernama) -- Prime Minister Datuk Seri Najib Tun Razak today announced a RM500 special financial assistance for the 1.6 million civil servants in view of Aidilfitri, to be given on June 13.
He said in a statement that a RM250 special assistance would be given to the 743,000 government pensioners in appreciation of their service.
"The special assistance will be paid on June 13," he said, adding that it would involve a financial allocation of RM1 billion.
"The government hopes that the special financial assistance will help ease the financial burden of civil servants and pensioners as they prepare for Aidilfitri 2016," he said.
Najib also said that civil servants would enjoy an annual increment in their salary in July, which would involve a financial allocation of RM1.1 billion.
-- BERNAMA
Posted by CUEPACS at 9:00 PTG 6 ulasan: 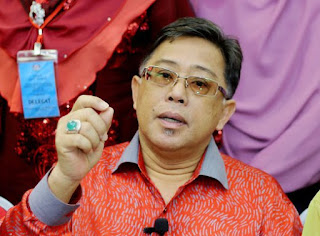 KANGAR: The Congress of Unions of Employees in the Public and Civil Services (Cuepacs) is appealing to the Federal government to consider giving a one month bonus to civil servants for Hari Raya Aidilfitri. 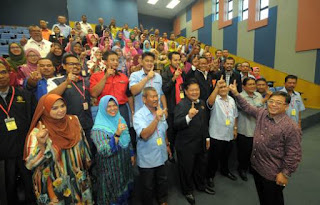