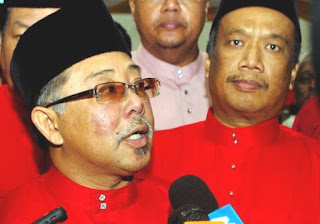 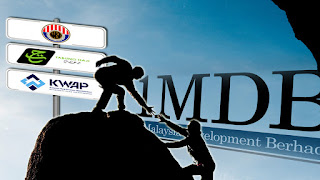 KUALA LUMPUR  - Former civil servants are worried whether their monthly pensions will be affected as a company at the centre of the latest 1Malaysia Development Berhad (1MDB) probe had borrowed money from Retirement Fund Incorporated Inc (KWAP).
KWAP, which was set up to help the government disburse pensions, had lent RM4 billion to SRC International Sdn Bhd, one of three companies raided on July 3 as a special government task force investigated claims it funnelled money into the bank accounts of Prime Minister Datuk Seri Najib Razak.
The fund had also invested RM1.4 billion in other 1MDB subsidiaries – Bandar Malaysia Sdn Bhd, 1MDB Energy Limited, 1MDB Global Investment Limited and Jimah Energy Ventures Bhd.
The probe by the task force was into allegations that SRC International and two other 1MDB-linked companies transferred money into Najib’s accounts between December 2014 and February 2015.
“We’ve had some members come up to us and ask whether their monthly pension payments would be affected (by the investigation),” said Datuk Omar Osman, who heads the 1Malaysia Civil Servants Retirees Club.
“We tell them not to worry because KWAP is doing what it can to secure the money that it has invested. Pensioners hope their monthly pensions would not be affected by what was going on in SRC.
“We hope that whatever KWAP does to help the government pay out pensions, it does with utmost care so as to not jeopardise monthly payments,” said Omar, who is a former president of Cuepacs, the umbrella group of public sector unions.
A pensioner who requested anonymity said KWAP’s ties to 1MDB’s problems were a topic of discussion among his former civil servant friends even before the current probe into Najib accounts.
“But it’s not like people are angry or they are about to go to the streets, because at the end of the day, they still receive their monthly payments,” said the former officer of a statutory body.
Presently, pensions are still being paid out by the government while according to KWAP’s website, the fund assists the government in funding those payments.
In order to meet this function, KWAP, to a limited extent, is allowed to invest in the stock market, properties and companies to generate an income.
Its loan to SRC International in 2011 has sucked KWAP into 1MDB’s troubles even before the probe into the Najib’s accounts was launched last week.
The loan is also guaranteed by the government.
In May, Petaling Jaya Utara MP Tony Pua said the Finance Ministry (which now owns SRC International) still could not account for RM3.6 billion KWAP had lent it.
On May 21, several PKR leaders filed court injunctions to stop KWAP, Employees’ Provident Fund and haj pilgrims’ fund (Tabung Haji) from investing any more money into 1MDB or its subsidiaries.
Former Finance Ministry deputy secretary-general Tan Sri Ramon Navaratnam is aggrieved and let down by developments in KWAP and how it was snared into 1MDB’s mess.
The problem, he said, stemmed from the fact that Putrajaya’s policymakers did not understand that the government has “no business being in business”.
In the private sector, money could be risked for profit but could also be lost with the ups and downs of a business cycle, said Ramon, who is also a pensioner.
“With the government, it’s the people’s money that is being risked. How can you hold the welfare and the future of the people at risk?
“As a pensioner and a taxpayer, I am greatly saddened about how we have gotten into this mess.”
Datuk Azih Muda, who is currently heads Cuepacs declined to comment on the loan and the fund’s investments in 1MDB, saying only the government has guaranteed the RM4 billion.
“The money will not be lost, that is the guarantee from the government. It will be paid back,” said Azih, who also sits on KWAP’s board.
Azih also had a message for civil servants who are worried about their pension payments.
“I urge civil servants not be swayed by perception and sentiment, not to get involved in the politicking around the investigations and to continue doing their duties.”
KWAP has not returned request for comments on these concerns. - TMI

He said disciplinary action would not be good on the records for a civil servant loan borrower.Azih, who lauded the move that will start with Public Service Department (PSD) officers this September, said pay deductions would also help the borrowers to become debt-free.

On Monday, it was announced that PSD officers will be the first batch to go through mandatory pay deductions – to set a leading example to other government agencies.PSD director-general Tan Sri Mohamed Zabidi Zainal said 480 of his officers would be subjected to the pay cuts when the initiative kicks off in September.Mohamed Zabidi will meet with the secretaries-general of all the ministries on Friday to discuss the mandatory pay cut initiative for other borrowers within the civil service.

When asked if the deduction would be burdensome to the civil servants who were already facing the high cost of living in the city, Azih was steadfast, saying “a loan must be repaid”.
“Whether we are doing well or not, we are obligated to pay back a loan that we’ve taken,” he said.“Settle the loan, then plan for other things.”
Posted by CUEPACS at 1:30 PTG 1 ulasan:

PUTRAJAYA: The dress code for entering government buildings has been around for at least 40 years and is meant to be followed, said Cuepacs president Datuk Azih Muda.Commenting on the uproar over dressing by members of the public when going to government offices, Azih said the problem arose as a result of some people’s “poor attitude and misconception”.

“It’s the attitude of some people. They are so against it. Some look at this through a religious point of view, but the dress code is not about religion.“Dress codes can be found anywhere in the world, in any government. It distinguishes bet­ween formal work hours and leisure,” he said.

Azih added that while the private sector allowed flexibility in dressing, this was not the case with the public sector, and this was something that “is not understood by the new generation”.

“We, government servants, have our decorum. The old folks get it. But now, people just don’t seem to care much,” he said.In Muar, Bernama reported Deputy Minister in the Prime Minister’s Department Datuk Razali Ibrahim as saying that the dress code at government buildings should not be questioned or politicised as it was related to a sense of propriety and respect.“The existing dress code is not race-specific,” Razali told reporters yesterday after chairing a Muar Umno meeting.

He added that dressing appropriately was also in accordance with the fifth principle of the Rukun Negara — Kesopanan dan Kesusilaan (respect and a sense of decency).Razali argued that the dress code should not be relaxed just because some quarters refused to comply with it as there were millions of citizens who respected it.A survey by The Star found that most security personnel at government buildings felt they were caught in the middle when enforcing the dress code, which prohibits shorts as well as skirts that do not cover the knees.

At Putrajaya’s Road Transport Department office, a guard said: “A few days ago, a woman wearing a short skirt walked into the office.“I had to ask her to leave. I got scolded, but I had to do my job,” she said.Another female guard pointed out: “If a visitor refuses to listen to us, we will call in an officer and let him or her explain the rules,” she said. “That has always been the protocol.”An officer concurred, saying giving sarong to “inappropriately dressed” visitors was never part of the procedure.

Azih said it was preferable for counter staff to be the ones doing the “advising”, especially if the security guard was a foreigner.“A foreigner telling you off about how you dress is different from when a Malaysian does it. We probably would think that the foreigner is trying to ‘teach’ us, so we dislike that,” he said.“But in terms of explaining the dress code, I think it is best for the Public Service Department to re-emphasise its importance.”

GAJI AWAL: BE SMART AND DISCIPLINED IN MANAGING FINANCES - CUEPACS

AZIH: They have to be more disciplined in managing their financial matters.
KUALA LUMPUR: Civil servants must manage their expenses wisely as the 46-day wait between July and August salaries might turn into financial disaster if they do not plan well.
The Congress of Unions of Employees in the Public and Civil Service (CUEPACS) president Datuk Azih Muda said with early salaries, civil servants have to be more disciplined.
Civil servants have already received their salary last Thursday and are scheduled to get the July's salary as early as the 9th. Their next salary will be paid on August 25.
“During Hari Raya, they will have to spend for the family needs and wants, as well as paying utility bills and other expenses,” Azih told Astro AWANI.
“They have to be smart this time around and be more disciplined in managing their financial matters," he added.
He also cautioned the civil servants not to overspend their July salary as they need to save as much as they can so it can be used after the celebration.
“If they fail to manage wisely, they will face difficulties,” said Azih, adding that the particular situation has never happened before and Cuepacs has no authority to change it.
He added, if such matter happens every year, it might be solved by proposing some sort of system rotation in salary payment or other adjustments.
“Civil servants, however, have to adapt to the situation. All this while Cuepacs has been helping them in assisting their financial arrangements and needs. This time around, they must help themselves,” said Azih.


Read more at: http://english.astroawani.com/malaysia-news/gajiawal-be-smart-and-disciplined-managing-finances-cuepacs-64282?cp
Posted by CUEPACS at 9:45 PG 4 ulasan: