The former PM created a mess when he privatised government agencies, says the president of the civil service union. 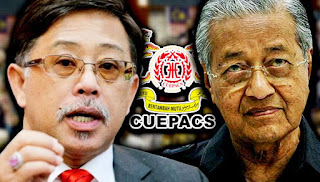 PETALING JAYA: Cuepacs has warned of dire consequences if the government were to privatise its agencies in an attempt to trim down the civil service, as suggested recently by former premier Mahathir Mohamad.
Many would lose their jobs because the new companies would hire as few people as possible to cut costs, said Azih Muda, president of the civil service union. He said this would be especially true if privatisation was carried in the current economic climate.
“We are thankful that we are no longer under Mahathir’s administration because, if we are, the civil service would be in a mess right now,” he told FMT.“Private companies are profit-oriented. When faced with a bad economy, they will downsize their operations and let go of their employees.
“And they would, of course, prefer to hire and keep foreigners or expatriates rather than locals.”
Mahathir last Friday said the privatisation of government agencies during his time as prime minister resulted in savings on salary bills.“But he failed to ensure the well-being of those who worked in the agencies that were privatised or guarantee their long-term employment,” said Azih.
“He created a mess when he privatised, among other agencies, those that provided electrical, telecommunications and water services.“Maybe Mahathir was thinking from the point of view of those at the higher levels. That’s why he could turn a blind eye to the repercussions against those of us who are at the lower levels.” The Malaysian civil service is believed to be the largest in the world in proportion to the country’s population.
Posted by CUEPACS at 2:56 PTG