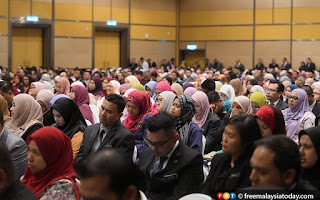 PETALING JAYA: Cuepacs has called for improved protection for those who report corruption in the civil service, claiming that many have suffered at the hands of their colleagues and superiors for blowing the whistle.

Abdul Rahman Mohd Nordin, secretary-general of the union, told FMT there was, in the civil service, a “culture of victimising” those reporting corruption or refusing to be party to it.

“Many have told us of being victimised or treated unfairly because they were suspected of having reported corruption or had refused to cooperate when asked to do something against the law,” he said.
He was commenting on Malaysian Anti-Corruption Commission (MACC) chief Azam Baki’s recent remark that the level of corruption and abuse of power among civil servants was worrying.

Last year, 467 civil servants were arrested for various graft offences. These included 109 from the management and professional group and nine from the top management group. The rest were members of the support staff.

Abdul Rahman said both bribe takers and givers must be punished and he urged the authorities to step up action against those offering bribes to civil servants.

But he also said corruption in the civil service was not as bad as perceived by the public.

According to that survey, 28% of Malaysians think that government officials are corrupt.

“Civil servants should be brave to report any form of corruption to MACC even if it involves their superiors or department heads,” he said, adding they would be protected under the Whistleblower’s Protection Act.

“It is time for the civil servants to be brave and rise up and change the negative perception of the public.”