The New Straits Times
2009/10/16
Teresa Yong
KUALA LUMPUR: Cuepacs is asking the government to give two months’ bonus this year to the 1.2 million civil servants in the country.
Cuepacs president Omar Osman said the two-month quantum was endorsed at the union’s three-hour special congress meeting held today. He said they were looking forward to good news to be announced in the 2010 Budget next week. Speaking to reporters at the Hari Raya celebrations attended by the Chief Secretary to the Government Tan Sri Mohd Hassan Sidek today, Omar said Cuepacs had already sent the request in a letter to the prime minister in July.
The government had paid a one-month bonus to civil servants in 2007. On the government's decision to implement a time-based promotion for the 300,000 support group in the civil service, he regretted that it was not yet implemented. “Prime Minister Datuk Seri Najib Razak had announced the scheme in July,” he pointed out. Under this exercise, those with 15 years or more of service and were stuck on the maximum salary scale for years were eligible to be promoted beginning that month. Omar said the delay was apparently due to those affected having their staff records being checked and verified. “We are requesting that the evaluation be speeded up as some 200,000 workers are affected,” he said. 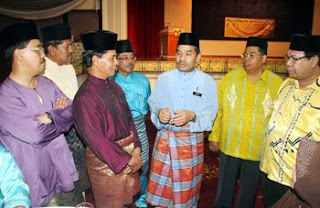